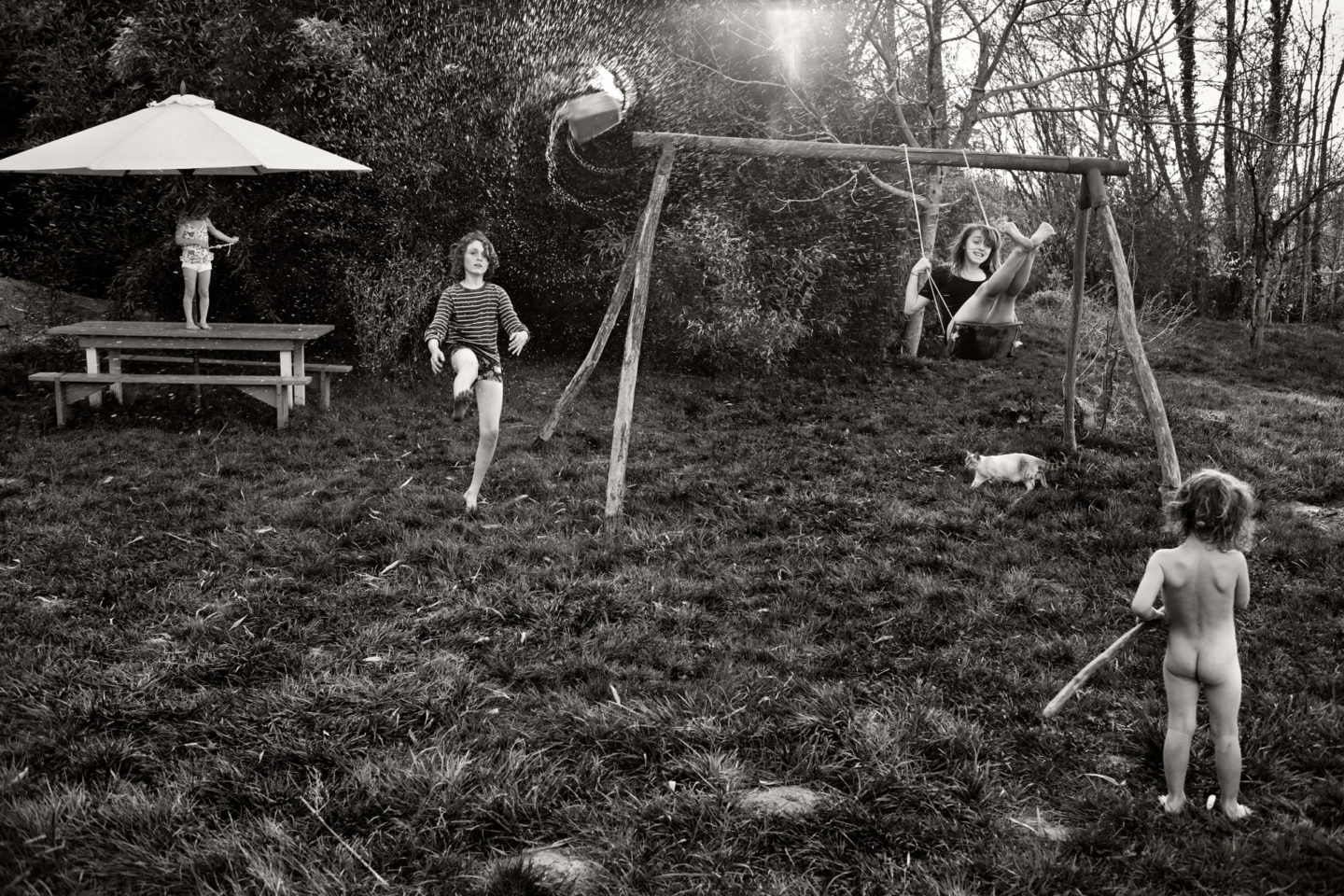 Budapest fotó interjú
"I work with my instinct and nothing is staged beforehand; there’s no scenery. I take pictures of the life which surrounds me" - says photographer and sculptor Alain Laboile who we interviewed after his show in Budapest.

“La Famille” is the title of the long-term series and visual project of French photographer and sculptor Alain Laboile, showcased for the first time in Hungary in the frame of the 2018 Budapest Photo Festival. The artist kindly accepted to answer to some questions for arportal that where send to him via e-mail. He wanted to reflect and give a conscious answer to all our inquiries. This interview has been translated from French to English for this publication.

Mr Laboile career as photographer has both been a case of serendipity and almost immediate success. The first pictures he began taking in 2004 in order to document his work as a sculptor, were awarded with two Canon national photography prizes in France in 2007 and 2008. As he began directing his gaze towards his own family, a visual archive of varied emotional registers was slowly being built, earning him international recognition both in Europe and the Americas. “La Famille” is a document of change and growth. In the 7 years elapsed since he first exhibited this series, some of his children have quitted the nest, and others are now passing from childhood to adulthood. His photographs set a spell on the eye of the beholder with a delicate balance of freedom, nudity and reverie. Mr Laboile refers to “La Famille” as his long-term series; and one can sense the fidelity and insistence with which he approaches this subject as his production grows without being rivalled by new photographic projects. Ethnologist of his personal universe, he captures iconic images of joy, youth, movement and exploration. It seems almost natural for the photographer to crystalize scenes which are born ready to be photographed, without any need to be staged.

David Cortés (D.C): Is there a moment during the day when you prefer to take pictures?

Alain Laboile (A.L): I take my camera every time I sense something interesting takes place. I have six children at home and there’s always something going on. Thus, my work is not directed by planning, or by a time table. I work from home, and our children are home schooled. This implies that we are together almost the whole time, which gives me the opportunity to immortalize every day all the small fleeting instants of our family life

Are you working on a new photography series right now?

A.L.: I continue with my long-term series “La Famille” but I also have ideas for new projects, I collect them in a small notebook for later, maybe… but now documenting my family life is the only theme of my photography. Children are growing, passing from childhood to adolescence. Some of them are already young adults and they are beginning to leave the nest. This is a very fascinating process and I never get bored of being its witness and visual writer.

Do you begin with a plan before photo shooting? And how does the creative process take place regarding sculpture?

A.L: I work with my instinct and nothing is staged beforehand; there’s no scenery. I take pictures of the life which surrounds me. It is almost documentary photography or ethnologic photography. When it comes to sculpture I let myself be guided by the desires of my children. I am creating a fantastic bestiary of giant animals for them which populates our garden.

How do you decide to shoot black-and-white, colour or dichromatic?

A.L.: I shoot all my photos in colour, and later I convert most of them to black and white. That strengthens the atemporality and universality of my images. However, in certain images colour is imposed naturally. But it is not a rational process, more of a feeling.

How did you begin your career as an artist? Was there an exhibition or an event which seems to you as a decisive landmark in your career?

A.L.: My studies where short and I did not discovered art until I was 20, while joining the women who was later to become my wife to her art history courses at the university. I was fascinated, especially by renaissance art. I began with sculpture as leisure until I started having my first orders. I specialised in metal sculpture having developed a special fondness for insects. In 2004, I procured myself with a small digital camera in order to take pictures of my sculptures. Following my passion for insects I experimented with the macro mode and obtained two national awards thanks to these photos. Little by little I directed my regard towards family and began sharing my photos in social media. The feedback was immediate, enthusiastic and universal, and in 2012 the New York Times published my work. This was a decisive moment.

I would like to know the story behind your new sculpture “Silver.” How did you get the idea of creating a giant photography camera? What sort of materials did you use? Which technical challenges did you have to face?

A.L.: Indeed, it is a giant replica (scale 1x 10) of the camera I use nowadays, a Leica Q. It is a multi-material work using wood, glass, glass fiver and rubber. I work regularly with the brand Leica (exhibitions, Master-class). The idea of this work is to counter position two totally opposed universes, which are nevertheless complementary to each other. The high tech and aesthetic rigour of the Leica cameras and my savage, brutal, instinctive, photographic universe. I am a carpenter and technically I didn’t have great difficulties creating this sculpture. However, I spent hundreds of hours of meticulous work in order to finish this sculpture which is completely artisanal.

How were you contacted to take part in Budapest Photo Festival?

A.L.: I met Szilvia Mucsy, director of the festival in 2017, in Grece, at the Photometria Festival in Loannina. She already knew my work and proposed me to be part of the festival this year. Sadly, I didn´t have the chance to go the festival in Budapest, and I have never visited Hungary. However, during my career I have met many people coming from Eastern Europe and they all have been charming. My last trip to Poland at the FotoArtFestival in Bielsko-Biala reinforced that idea. There is a constant emergence of young talents coming from Eastern Europe in the photography scene; it is indeed a formidable artistic pool.

Interview conducted and translated from French by David Cortes. April 2018.