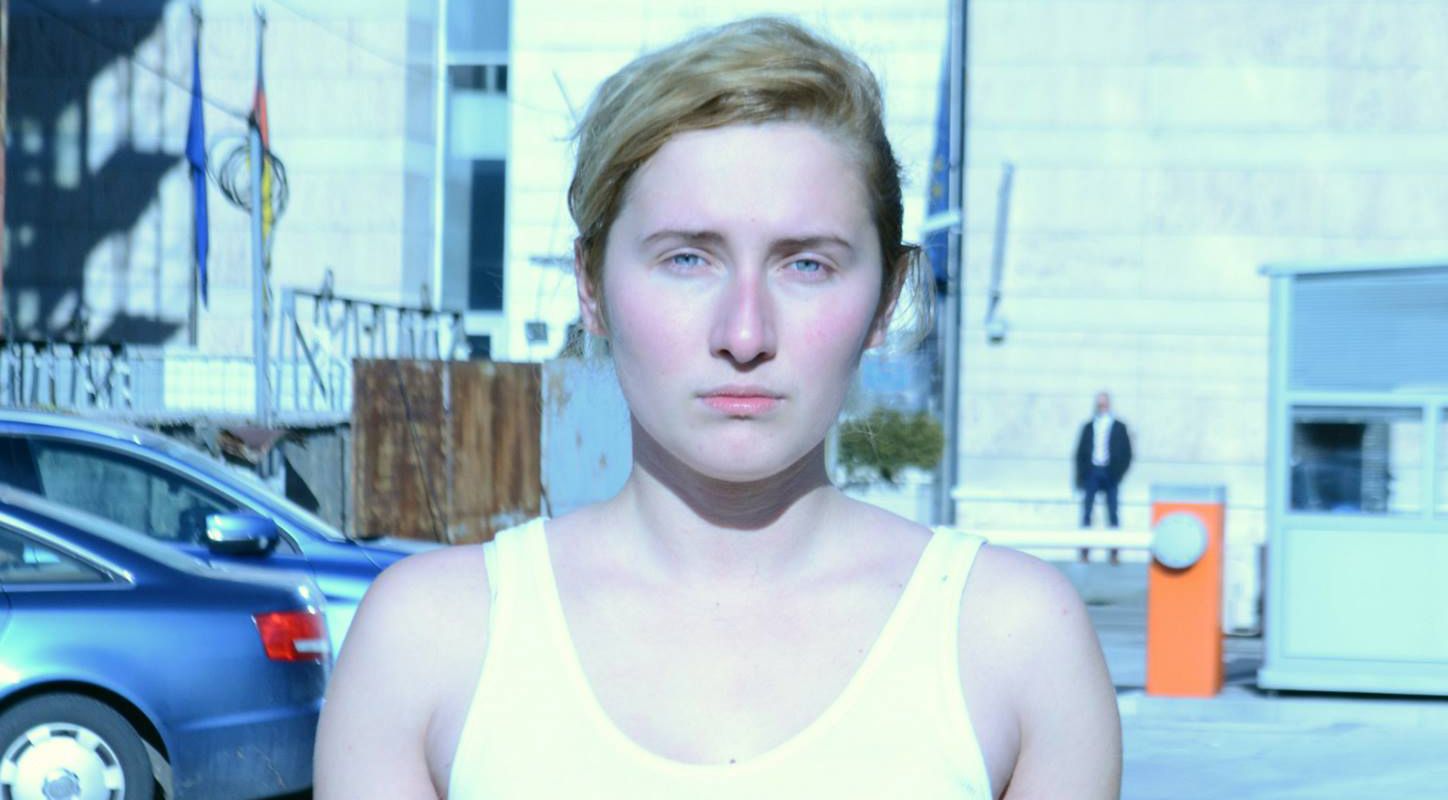 interjú Szarajevó
"My works are spontaneous reactions to the absurd situations of life in Bosnia because I need to find a way to cope with my own frustration of living in this system." We met Smirna Kulenović in Sarajevo. Part two.

Despite the artistic and civilian efforts to create constructive dialogues, the war in Bosnia has never really ended as painful memories and unresolved conflicts are still haunting the country. Who is responsible for the crimes of the past and for the current apathy?

At the end of the first part of the interview Smirna Kulenović said: “I try to do things without money, as dirty as it gets, in order to show that even though we don’t have money, we have good will and solidarity, like amongst those few people who gave us cables and lights for the action. Things can really be built from nothing.” We continue from here.

This interview was made on 6th November 2018 in Sarajevo, in the frame of the East Art Mags residency program. Part II.

Réka Deim (RK): After the Dayton Peace Agreement, there was a lot of discussion about the controversial position of the international community in the war, especially with regard to the Srebrenica massacre. One of the most widely known images to reflect on this issue is Šejla Kamerić’s Bosnian Girl (2003), which has activated a discourse on the agency of (female) victims. [i] What would you like to add to this discourse by referring to Kamerić’s work with your Bosnian Girl 2 (2017)?

Smirna Kulenović (SK): This work combines everything I feel about the current situation and about resistance. Initially, I didn’t try to reflect upon Bosnian Girl, it was triggered by a spontaneous situation. First of all, my family is connected to Srebrenica, we’ve lost family members there. When I was five years old, I saw a mass grave. My parents took me there. Parents in Bosnia were also crazy after the war – how can you let a kid witness this? The first thing I remember was seeing dead bodies in a hole and the horrible smell. At the age of just five, I became aware that there were evil men who had killed all these people and I didn’t understand why. As kids, when we saw helicopters, we would think they were looking for Ratko Mladić. It was like a game – seeing a helicopter, we would say: “maybe they found Ratko Mladić”. Only now I understand that it was not the normal way of having a childhood and now I’m trying to deal with it in a better way.

There are two different types of parenting here in this regard. First, when the parents themselves are not able to face the war, they try to forget, block memories and they don’t want to bother their kids with it. This creates a generation of kids who are completely unable to understand what happened so they are easily brainwashed. At school, they learn about different horrible histories and they don’t know what to believe so they are more easily manipulated by politics. Some parents from my school told their kids that people didn’t die, they just went to Germany. I even had a fight with the mother of my friend once, as we walked next to a graveyard and the kid asked what was underneath. The parent said that furniture was buried there from the people who had left for Germany. Can you imagine? Some parents don’t want to face this themselves and create a lot of confusion in kids.

My parents are journalists and they have always been engaged and open about the war. During the siege they were running a radio station – when there was electricity – and they had a program to speak of poetry. They were activists and raised me in this way. They did not hide anything from me so I knew what it meant if somebody died. In Srebrenica, my parents wouldn’t tell me who had committed the massacre, they told me it had been done by really evil people. They didn’t tell me until I was a teenager, when I could discuss history. I think if someone had told me this was done by Serbs, I would have become a hater. As a kid it’s easy to start feeling hatred… and also that smell – I think the smell of that place is still haunting me after all these years. And how many kids have seen worse things… How do they cope with this realty and who creates space to talk about this topic?

RD: Bosnian Girl 2 was made on the day when Ratko Mladić, the former Bosnian Serb General responsible for the siege of Sarajevo and the Srebrenica massacre was sentenced to life imprisonment in 2017. In what sense does this work engage in human carnage and silenced traumas?

SK: For twenty years, everybody in Bosnia, whether or not connected to Srebrenica, was waiting for Ratko Mladić to be sentenced by the International Criminal Tribunal. This position of waiting was something that frustrated me so much over the years because why are we waiting for twenty years for somebody from the Hague to tell us there was indeed a genocide, 8000 people were killed and yes, this man is responsible. I mean, I saw it with my eyes and my family went through it and all the people here know it’s true. But still half of the country – that is, right-wing Serbian nationalists – are trying to write a different history, according to which the war is a lie invented to create a negative image of Serbian people. I’ve met people of my age who deny the war and the genocide. When you look at their history books, the narrative stops in 1992. It’s a conflict that has existed inside the country and the whole Balkans for twenty years that we don’t want to face our own history and we are pushing the responsibility to somebody else out there in Europe to solve it for us.

And there comes the day of the verdict. I was sitting with my family in the room, watching it on TV. I felt like I was preparing for this day my whole life. He is accused of 11 counts and the first point says that he did not only commit genocide in Srebrenica but also in six other municipalities. He actually did. If the court knows the definition of genocide based on the ethnic and religious cleansing of a certain group of people, how could the judge say something like “not enough people were killed to call it a genocide”? OK, they found him guilty regarding Srebrenica but saying “not enough people were killed…” [ii] I immediately had the reaction that I want to kill somebody. I went outside and I was walking around the city like a crazy person. I felt I needed to do something and I didn’t know what. As I was passing next to the EU building – this building represents our only connection to the EU and the international court – I felt that it’s not just that I wanted to show them a middle finger but I also wanted to show us, all the people here because we have put ourselves in the position of waiting for so many years. My friend was there with a camera and he took a photo of me. I stayed standing like that but he was afraid that we would get arrested so he left. I stood there, showing middle finger, asking myself after like half an hour: “what am I doing?” Then the security people made me leave.

When my friend sent me this photo, it immediately reminded me of the portrait of Šejla Kamerić because of the white shirt. And for me this is Bosnian Girl 2 because it’s also playing with the idea of the victim. I don’t want to be this victim anymore and I think the new generation of Bosnians, not only women but everyone, are a bit angrier and in resistance towards the system, our own past and our own stupidity. Also, towards the fake ideal of Europe we are constantly bombarded with because of our goal to enter the EU. In workshops and seminars we can only hear that the young generation needs to believe in European values, humanism and so on, but when I read about what’s going on in the member states, where right wing parties are taking over, it seems to be a completely fake ideal and I don’t believe in it. In this work I’m not only showing middle finger to the EU but it goes first of all to the whole Balkans. This is why I decided to project the photo on the façade of every contemporary art museum in the Balkans and communicate it in the public space. Only after the Balkans I started exhibiting it elsewhere.

RD: What sort of reactions did it generate in the local context and internationally?

SK: Sadly, most of the reactions here were patriarchal. I got a lot of threatening messages saying that I misrepresent the idea of Bosnian women in the world because, while Šejla Kamerić represented women with dignity, I show us as rude and stupid. Some people wrote that I look like a lesbian and the picture should rather be called “Bosnian boy” or even things like: “somebody should rape you, stupid Muslim girl.” These are the most extreme comments I got, a lot of which were connected to the masculine looks and the misrepresentation of Bosnian women. Negative reactions also came from Belgrade, because as we put up the image in a public space there, it immediately got destroyed. But there were a lot of positive reactions too, for example, some activists started using the image for protests and it became important for talking about what happened in the last twenty years. In Europe, wherever I showed it, I received really good feedback and dialogues emerged around the topic. Right now I’m trying to show the work in The Hague and in Brussels, which turns out to be really difficult because it’s not so easy to be critical there.

[i] In her poster, the following inscription is superimposed on the artist’s portrait: “No teeth…? A mustache…? Smel like shit? Bosnian Girl!” and an explanation is provided at the bottom of the image: “Graffiti written by an unknown Dutch soldier on the wall of the army barracks in Potočari, Srebrenica 1994/95. Royal Netherlands Army troops, as part of the UN Protection Force (UNPROFOR) in Bosnia and Herzegovina 1992-95, were responsible for protecting the Srebrenica safe area.” See, for instance: “What Does a Victim Look Like? An Interview with Šejla Kamerić on the Legacy of ‘Bosnian Girl.’” Balkanist.net, 7 July 2015. https://balkanist.net/what-does-a-victim-look-like-sejla-kameric/