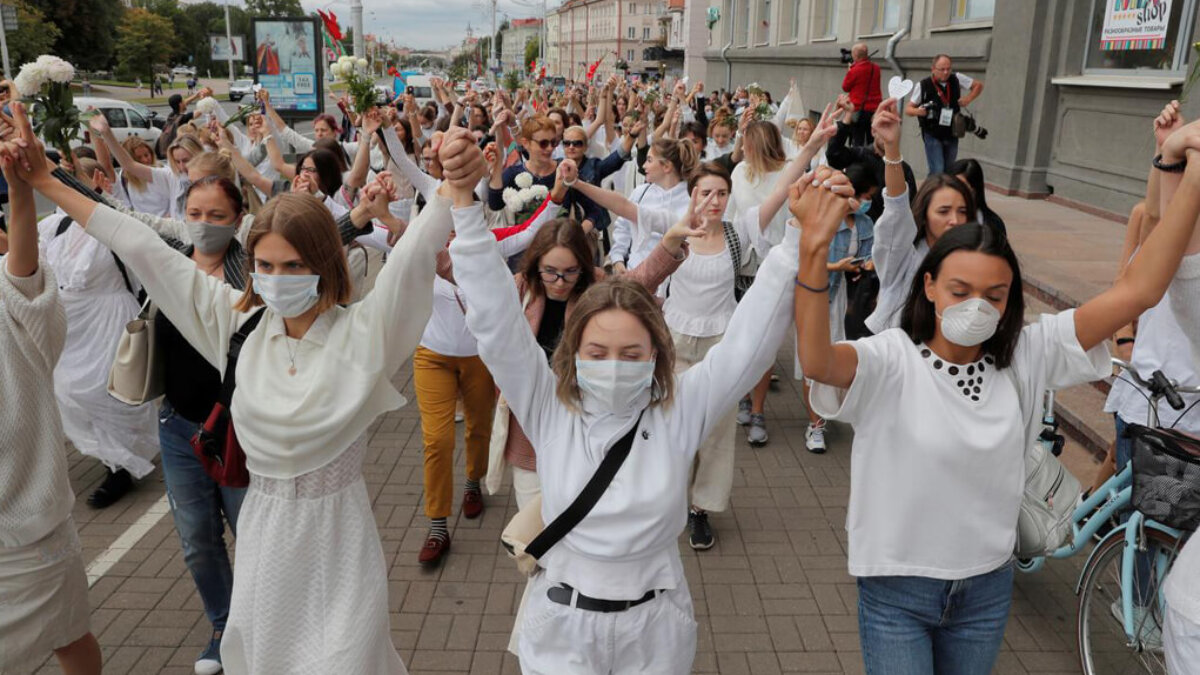 "The artists are also taking part in the demonstrations like everybody else", says Minsk based artist and writer who we asked about the current situation in his country.

More than ten days now Belarus has been living a dramatic time. After the presidential election when the electoral fraud became obvious for the people, tens of thousands of Belarusians started to protest on the streets in many cities all around the country. Right now there are strikes at the major state owned companies and also the majority of the workers of the state run media are on strike. The protests continued even after the police brutality and despite the fact that the presidential candidate of the united opposition Svetlana Tikhanovskaya was expelled from the country. After 26 years in power, the regime of Alexander Lukashenko, the “Europe’s last dictator” is likely to fall.

We were curious about how the local art community reacted to the rapid changes of the recent days and whether the artists themselves are taking part in the demonstrations. East Art Mags asked Minsk based artist and writer Aliaxey Talstou.

East Art Mags: After the first days of the unrest when the police reacted very violently it seemed that the recent days brought minor victories for the resistance, for the people. Mass demonstrations everywhere. Nationwide strikes even at the state run media. Factory workers in Minks booed the president. Do you think that there is a chance Lukashenko will go?

Aliaxey Talstou: I believe that it is inevitable. The guy already lost. In fact, he lost a while ago before the elections, probably years ago. And after all this mess of the last week now pretty much everybody is denouncing him openly. Yesterday I have heard children on the playground playing and shouting “Lukashenko go away!” So, for now, he is done. Even if he disagrees and claims that he will not give up the power even after his death. The biggest problem we have today is how to make this obvious situation of changes formal, how and to whom transfer the power. After 26 years of authoritarianism, in an almost sterile political scene with a low level of representation and public discourse, with populism and cultivated absence of political opinions in society, this is the toughest issue.

What kind of impact does this situation have on your life, personally and professionally?

A.T: Well, I’m an artist and writer, but I also do coordination of art and culture projects, curating, etc. The latter is totally wiped off, I have no time for that and just can’t do this stuff. It isn’t important now. But I can’t do art properly either, do not have the time for reflections, thinking and creation. I just can’t concentrate on anything else than the current events, so I realized that I should write about this situation. I’ll try to do so as much as I can.

Personally? First I am just shocked, and can not understand what is going on, which information should I trust, which I shouldn’t. I could avoid detention so far, have had to run and escape several times. I don’t think I’m scared of any kind of crackdown though. I had no illusions about the inhuman nature of the special police units and the absence of any moral ground among those who give them the orders. But even if I thought I was prepared for this, frankly, I barely can watch the images of tortures. It is still too hard for me to accept that this is the reality now. I can’t tell you right now how I’m affected personally, maybe because I’m affected. It is too precarious now.

A.T.: Sure they did. Everybody is taking part. It doesn’t matter much what is your profession. You are just doing what you have to. And yes, there were coordinated statements of artists and culture workers. At the very beginning, an open platform for visual materials was created, and artists and designers contributed to producing signs and posters that anybody could download, print out and use. Artist Antonina Slobodchikova created a logo for the united office of the opposition candidates, the heart-fist-victory sign. Aleksei Kuzmich made a performance at one polling station and on the street during the first night of the unrest and was detained. Also, we have had a collective open letter of artists and cultural workers with condemnation of violence and stating our demands. Artists were joining the general strike, making the chain of solidarity near the Palace of Arts. There are strikes of museum workers at the National Museum and others, strikes at the Philharmonic Hall and the Opera and the Ballet Theatre with improvised concerts. The Janka Kupala National Drama Theatre is on strike as well while their director was fired because of his political statements. I think that not declaring your political demands and believes today is quite unethical.

Besides all the activities of the members of the art community I think that real art is what is happening on the streets right now. And because of this the particular works created by individual artists are just not so representative. In fact, I believe that in the situation of collective struggle the natural and most sincere and effective works are created spontaneously for the rallies and during them. The mass protest can’t be claimed or channeled or interpreted by a single person. The poetry of the posters is the main genre of art today. It became obvious at the meeting on Sunday, August 16. Some statements were close to the situationist’s or sounded a bit like ones from Monstratsiya (an artistic-political rally) without much connection to these. The quire of slogans on the streets comes up with something new quite often. The very performativity of the street protest looks a bit like a dance. People in solidarity chains on the sides of the roads. Cars are blowing horns in support. I believe we are all in the state of a very intensive expression of political opinions, and art as a communicative tool is used pretty much everywhere.

According to the report of Freemuse, Belarus is among the “Top 10” countries in the World known to have detained artists in the recent years. What would you say about the general state of artistic freedom in Belarus now?

A.T.: You know, five-seven years ago many could agree that in Belarus the art and culture sphere is much safer for political statements than the direct political action. I believe it was true even until the very recent time. Yes, there were cases of detention of artists, there was pressure and so on. There was a huge division between state institutions and private ones, between conformists from the Union of artists and other self-organized structures of those who mostly work with more contemporary media, tools and concepts. It seems to me that it is not enough to compare the numbers of detained artists or banned shows in different countries. It is necessary to look at the whole structure of society, the political situation, economical and cultural situations. When there is a lack of freedom of speech it is doubtful that the art will flourish, or at least the representation of the art. When there is a problem with education in general, it is the same for the art academy and the specialists, the artists, art critics and curators have to leave the country or stay but struggle. There were lots of censorship and self-censorship over all these years. Some artists tried to revolt, some tried to balance between being exhibited and still remaining sincere. This situation is not black and white for me, and there are many nuances worthy of a separate discussion. I believe there will be many publications on this in the future. The issue of artistic freedom was discussed by artists even two weeks ago, but now it isn’t the main topic in our talks understandably.

What are your expectations? What do you think will happen now?

A.T.: There will be changes. The question is what kind of changes will we have. In a couple of weeks or months I hope Lukashenko will resign. I hope there will be no bloodshed or intervention of any foreign power. I hope the strikes and rallies will work and we will have a gradual transition. What I’m thinking about a lot is the future. Those who represent the alternative are absolutely pro-market neoliberals with quite a conservative agenda. They probably even more hardcore in their believes and ideals than some of their colleagues in the West. Just yesterday they proposed a list of the possible members of a Coordination Committee for the transformation of power. It immediately gained a lot of criticism as the names on that list are mostly from the private sector and from the old intellectual elites. No workers while the strikes are spreading across the country, no women’s organizations, no LGBT, no other political views represented. It is vastly imbalanced. And this is sad because it means that those who say that they represent the people show that they don’t need them for making decisions. Probably because of the rapid development of the whole situation the media-figures of the protests can not follow the dynamics of it well enough. But I hope that these issues will be resolved. We just have no other option. In my opinion, this country doesn’t need a new presidential election because the very position of the president became questionable now, especially when people did not vote for some political figure with a clear alternative program, but voted against Lukashenko. It looks like there is no time to take a breath, but we better do so. We should take a moment, and discuss what kind of future we want and then create it all together.